Today's men's 15 kilometres + 15km skiathlon event had everything a spectator could ask for.  Despite an early fall, the Norwegian team managed to make it a Norwegian 1-2-3 in the end.

There are many lessons learned from this event that can be used by entrepreneurs, startups and large enterprises. This competition proved that you can be great at what you do.

Simen Hegstad Krueger (NOR) already broke a pole in the start, and Andrey Larkov (RUS) also must have had an issue, way off the back with Kruger #skiathlon #olympics

But you need a team to be the best.

It all started with a big drama: Simen Hegstad Krüger lost his balance at after only 200 meters, and his ski pole snapped. At the same time he had to protect himself from those behind  that fell on top of him. Russia's Denis Spitsov and Andrey Larkov toppled over him.

In that second, everyone felt sorry for all three of them, making it impossible to chase for medals. But Simen and Denis ended up proving everyone wrong! Simen won the gold medal, and Denis came in 4th. An incredible effort by both. But the difference between these 4 places today became very evident. It can be summarized in 4 powerful letters that put together make the word TEAM!

After the competition, Simen expressed his first thoughts as he was lying there with two Russians on top of him:

I thought it would be the world's worst day with the start I got when I was "down" with a broken rod and a ski through my starting number.

​In a situation like this, you can either give up or be motivated to win. But recovering the 40 seconds would be like eating and elephant on your own. And how do you eat an elephant? You simply have to start bit(e) by bit(e).

As the maestro of a team like this, you have :

​The Norwegian coach Tor Arne Hetland was the one who literally got Simen back on track. He ran over to Simen and gave him a replacement for his broken ski pole. At the same time, he managed to give him a few words of advice: "take it easy - go 'slowly', take one by one in front of you, and work your way up to the lead group."

This helped Simen adjust his strategy. After the race, he said: "It is an indescribable feeling: It is an amazing day, but it started in the worst way with the fall after the first 100 meters and a broken pole."

I was completely last in the group so I had to start the race again and switch focus to catch up with the guys. When I did it I was saying to myself, 'okay, take one lap, two laps, three laps and just get into it again, and try to do it on the final lap'. I knew that my chance was to go early and try to surprise the group."

​#Shapingtheodds is all about preparations. And about not giving up. Simen managed to see his plan through.

As the racers entered the transition phase, Simen was able to work his way back into the lead group and was working in tandem with compatriot Martin Johnsrud Sundby. As they passed the three-quarter distance, they were both well in contention along with a number of big names.

At this point most of us would have thought that the strong and experienced Martin would win the competition. However, with the final lap beckoning, Simen made a big move and built up a 10-second gap to the rest of the field.

If this were the Norwegian national championship, Martin would immediately have followed him, and closed the gap. But today he chose not to. Instead he looked to the other member of the Norwegian team, Hans Christer Holund. Both wanted to go for Gold, but instead they waited, waited and waited. And then, when Simen's gap had increased to 20 seconds, they went for it!

The three Norwegians were awarded the Olympic Gold, Silver and Bronze for their efforts. 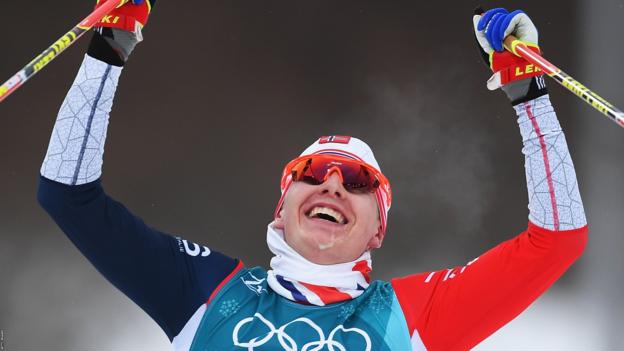 Norway's Simen Hegstad Kruger makes a remarkable fightback to win gold in the men's skiathlon at the Winter Olympics.
http://www.bbc.com/sport/winter-olympics/42967971

"I'm super happy for the good results from the team, and the team effort was brilliant. Tactically, everything worked out well," the coach Hetland told  Reuters following Krueger's superb display, and added:

"Every one of the Norwegian racers has their own plan, and we know that everyone who is starting for Norway has a gold chance, that's the reason it works so well when everything comes together."

Before the competition, many would expect Norwegian Johannes Høsflot Klæbo to win this race. He was the only one of the Norwegians to not get a medal.

Had the race started a bit differently, he could have easily won.

So why did Simen end up with the victory? He only had one gold in earlier major individual competitions - from his 15km freestyle International Ski Federation World Cup triumph in Italian resort Toblach in December 2017.

One important lesson learned is that if you do not act as a team, you will not win in international competitions. The same goes for your startup or the company you work for. Martin Johnsrud Sundby or Hans Christer Holund ​would have the best personal interest in going for gold. But they chose not to.

Why? Most commentators suggested that their coach had told them to hold back. But making such instructions "live" out in the field is not easy. It turned out not to be the case. Instead, it was all part of their team strategy.

Martin Johnsrud Sundby told in an interview with NRK that the tactics were already planned in advance:

"If any of us managed to get ahead, the rest would not help closing the gap," he said.

So a second lesson learned, is that it is all about planning what to do when various situations might happen, so that when they do happen, you stick to your plan.

"We looked at each other and expected someone to go. I was surprised none (of the competitors) did, and at one point we just had to go to try to secure the triple." he added.

For Martin and Hans Christer sticking to that plan meant that they could not follow their own individual goals - going for the gold medal. Instead the team tactics resulted in the best possible results for team Norway.

And Martin expressed his feelings about this too:

"Although I wanted gold, this is almost the same. We are three boys from Oslo who have trained together for this year. We manage to succeed one hundred percent with our team play in the Olympics, we stuck to what we had agreed and we managed to end up as number one, two and three. It's emotional to stand on the podium with these two boys," he admits.

#ShapingtheOdds is about being ethical

On a different note, it is also important to mention ethical aspects in your efforts in #ShapingtheOdds.

There are many ways of improving your odds professionally. You have to do everything you can do in order to be the best at what you do. #ShapingtheOdds is all about that - as long as you do not cheat.

Very often you would find it easier to reach your goal by using shortcuts. It is bad when you do that alone. And it is even worse if it is part of your team culture.

Cheating can result in a short term success. But in the long run, you lose.

Denis Spitsov managed the same individual miracle as Simen Hegstad Krüger​ by catching up on the 40 seconds to the lead group. But he did not have the same team helping him the last mile.

As a penalty for operating a massive state-sponsored doping program, the Russian tricolor flag and national anthem have both been banned from the Pyeongchang Games. The flag won't appear in the opening ceremony, on the uniforms of Russian athletes, or at any medal ceremonies. Officially, Russia will win zero medals at the 2018 Winter Games, even though Denis could have won his personal one.

Maybe this fairytale story could have been all about Denis and Russia if this had not been the case.

We will never know. Instead, we at #ShapingtheOdds want to congratulate Simen, Martin, Hans Christer and everyone from the Norwegian team that made this result possible on a Sunday morning.

Simen thought for a moment it would his worst day ever. Due to his own preparations and the Norwegian team effort, it ended up as his best!

Tweet
How do you feel about this post?
Happy (1)
Love (0)
Surprised (0)
Sad (0)
Angry (0)
Tags:
Pyeongchang 2018 Winter Olympics
How to become world-class at anything
How to design for everyone, in 3 steps

Pinned Items
Recent Activities
There are no activities here yet
You need to login to read the rest of the stream items.
Login or Register Now
Please login to view more feed items