Neil Armstrong and his Apollo 11 crew brought a 30cmx22cm bag labeled "Lunar Sample Return" when they returned to earth 48 years ago. It disappeared, until a manager of a Kansas museum was convicted of its theft in 2014. The U.S. Marshals Service put it up for auction three times, drawing no bids, until Chicago-area attorney Nancy Lee Carlson decided to Shape her Odds by offering $995 the next year.

It turned out to be a great investment!

She sent it to NASA for authentication, but had to sue them to get it back. Not only was it authentic, it turned out it had still moon dust traces inside.

The attention she got taking NASA to court caused lots of interest in the bag, and before the weekend and American collector offered $1.8 million for the moon bag.

Nancy Lee Carlson has for sure been #ShapingtheOdds.

The future will tell if the the new owner will succeed in his attempt. 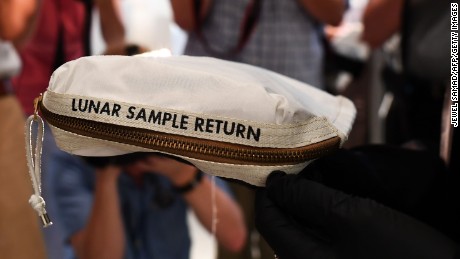 A long-lost bag used by Neil Armstrong to bring back moon samples during the Apollo 11 mission has just been sold for $1.8 million. Watch it on CNN here. ​
http://edition.cnn.com/videos/cnnmoney/2017/07/21/moon-dust-auction-neil-armstrong-cnnmoney.cnnmoney/video/playlists/stories-worth-watching/
Tweet
How do you feel about this post?
Happy (0)
Love (0)
Surprised (2)
Sad (0)
Angry (0)
Tags:
NASA ShapingtheOdds Entrepreneurs
10 ways to keep your business running smoothly whi...
The only career change question you need to ask ri...

Pinned Items
Recent Activities
There are no activities here yet
You need to login to read the rest of the stream items.
Login or Register Now
Please login to view more feed items